A couple of weeks ago, there was a post about 7/10 decks on the r/EDH subreddit. I was curious to see what the general trends were, so I’ve been pulling together and cleaning those decklists in little bits of spare time I could find. The Archidekt and Deckstat’s API interfaces made it easy to pull those lists into R, but TappedOut and MTG Goldfish required some more work on the backend.

In the end, I was able to get the data for 293 decks comprising 4809 unique cards. This post is just a breakdown. It doesn’t do too much thinking about what makes a good 7/10 deck. Instead, it describes the broad composition of the decks listed in the thread. The concept of a 7/10 deck is inherently subjective and relative to any given meta, but perhaps looking at the data will provide more form to the amorphous idea of the 7/10 deck.

Quick notes: I missed about 14 decks from the original thread because they weren’t on the big four sites or were in unusual formats (e.g., google sheets, plain text post). Two of those decks actually linked to deckstats decks, but the URL was in a different format, and I didn’t catch them until later. A few other decks from the big four sites didn’t make it because of URL errors. It appeared as if these decks didn’t exist or were private, so I wasn’t able to bring them. There is also price data missing from 184 unique cards (682 total cards). So while this means that the price data was complete for 97% of the sample, several of the missing cards would have accounted for pretty large price spikes. For example, all of the original dual lands did not have price data attached when I downloaded the info from Scryfall’s API. Most of this work was done in R, but I did use the PRAW library in Python to scrape the deck links. There is an Appendix accompanying this post with extra tables and graphs that didn’t make it in here. The basic deck data can be found here as well.

Where are the decklists hosted?

Most of the decks are from TappedOut and Archidekt. I knew a lot of people from the EDH community used TappedOut, but I was surprised by the large margin of its share. A full 50% of the decks posted on the thread were from TappedOut. This is probably influenced, at least in part, by the site’s longevity in the community (from what I can tell, it’s been around since c2005). Once someone has committed to using a platform, they may be reluctant to transition to something else. Also, it has prominent users such as the Game Knights crew, which may funnel users to the platform.

Archidekt, on the other hand, is the newcomer on the scene (c2018). Despite this, it holds an impressive 35.5% of the decks from the thread. It has a very sleek interface, so I get the appeal. I wonder if newer players are drawn to this because they don’t have a history of TappedOut (which has a pretty old-feeling deck builder), but that’s a question for a different time.

I personally prefer Deckstats (c2009) for its interactive deck builder, but it and MTG Goldfish are not nearly as popular with r/EDH. While r/EDH isn’t necessarily a representative sample of the wider EDH community, my hunch is that the general distributions seen here still apply the wider community (albeit with large confidence intervals). Just a cursory look through EDHREC shows that Archidekt decks outnumber Deckstats decks about by a pretty wide margin.

Land. It’s what makes the game tick. It’s hard to do anything without land. Most mana bases include between 35-38 lands. That’s neat. 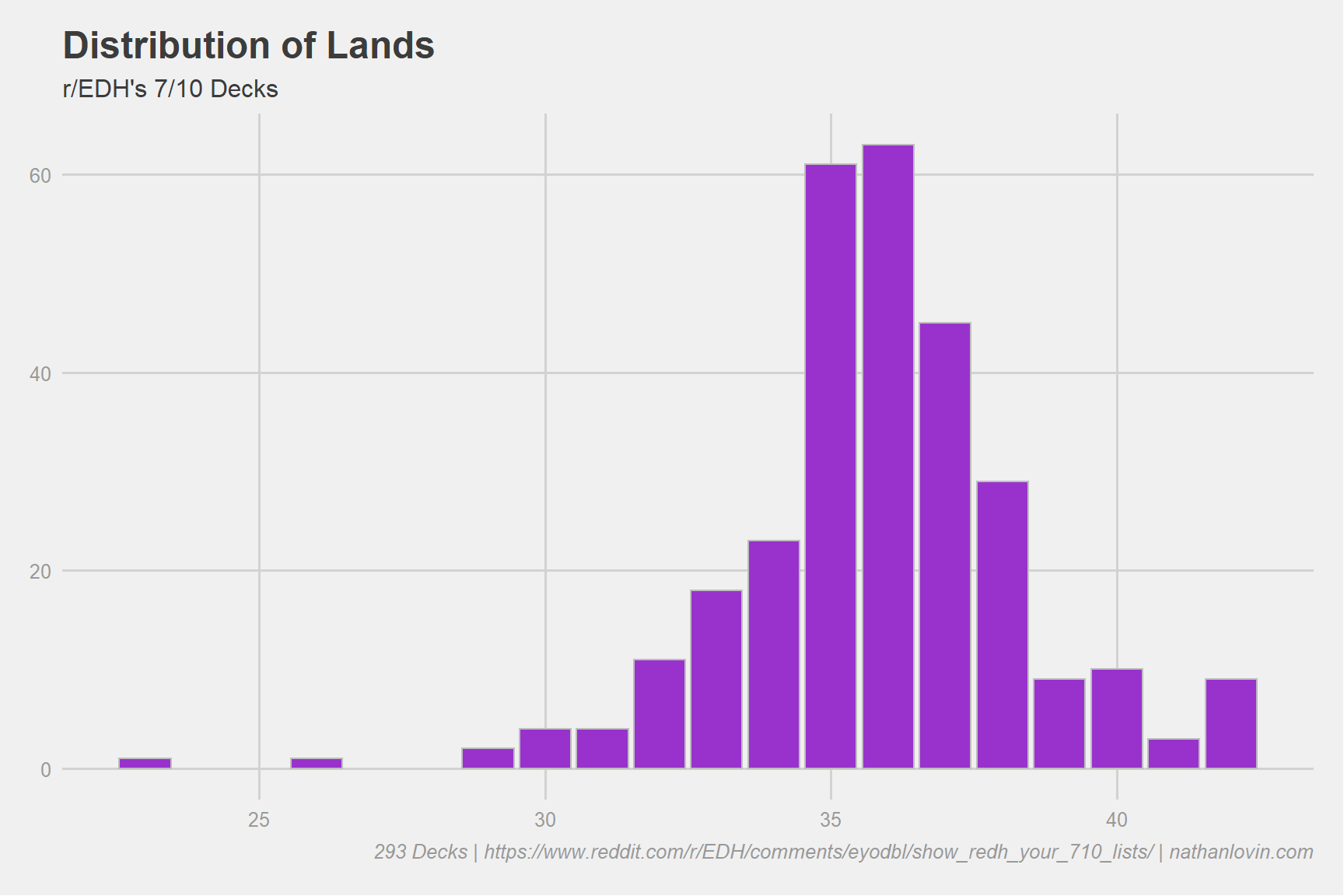 Looking at color frequency, Black is unsurprisingly the most popular color. Red, sadly, sits at the bottom, making it the least frequently played color. Don’t worry, I still love you red. 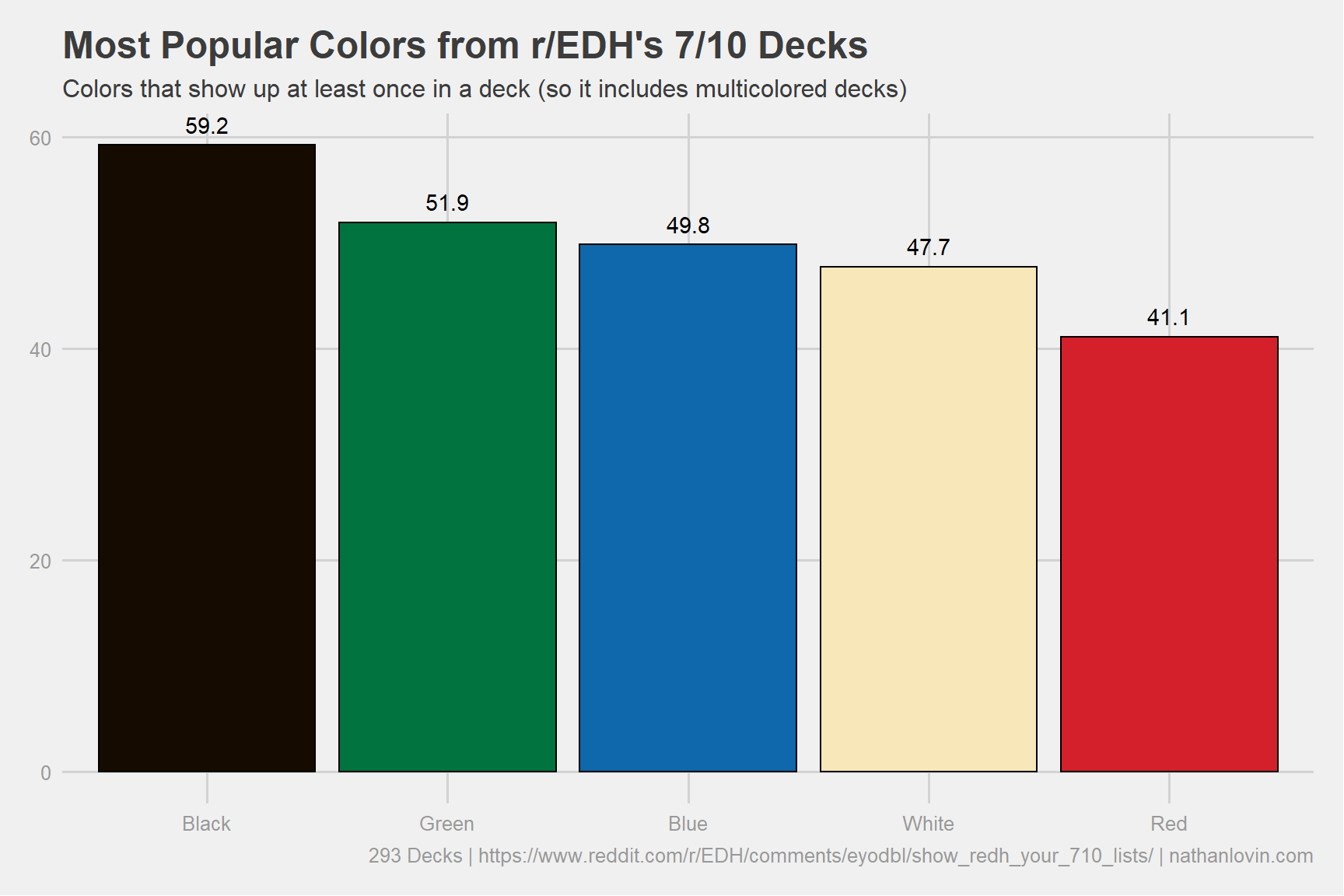 The color pairings are a little more interesting. Mardu is the most popular color pairing, followed by Sultai, Bant, WUBRG, and Simic. Considering Red is the least played color, it still shows up in 2/5 top color pairings, which is an OK consolation prize, I suppose. I should probably look at color distribution within decks. Maybe looking at pips would be a better way to analyze how players are using the color pie.

For example, even though Mardu is the most popular color pairing, players may be leaning more heavily on the Arzov aspects of the trio. If that were the case, looking at the lower-level usage of the color pairings beyond just a commander’s color identity would give us a better idea of how the color pie was being utilized in the game. But also, if this were the case, they’d definitely be missing out on slamming some goblins down and having a good time, but maybe that’s just me… 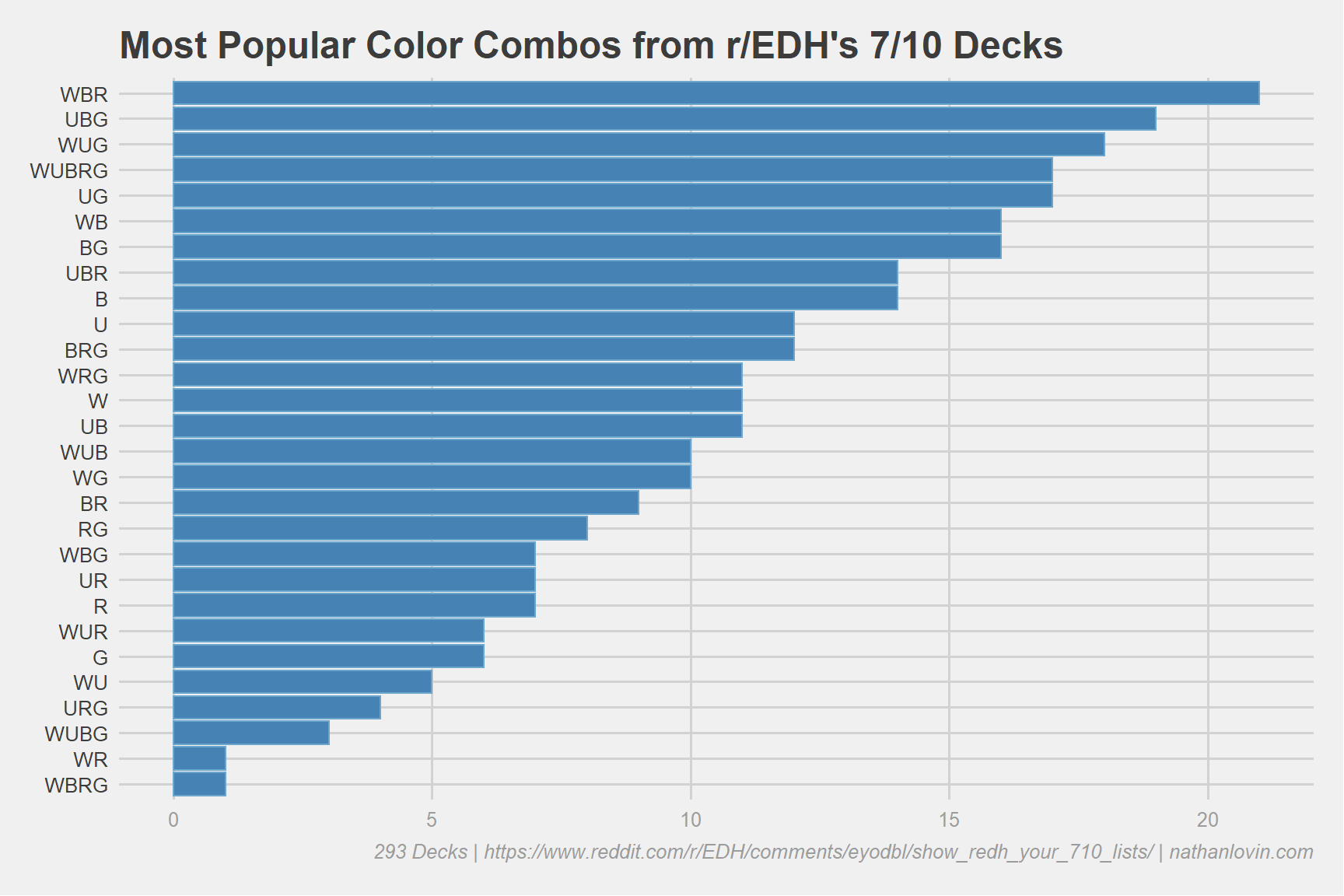 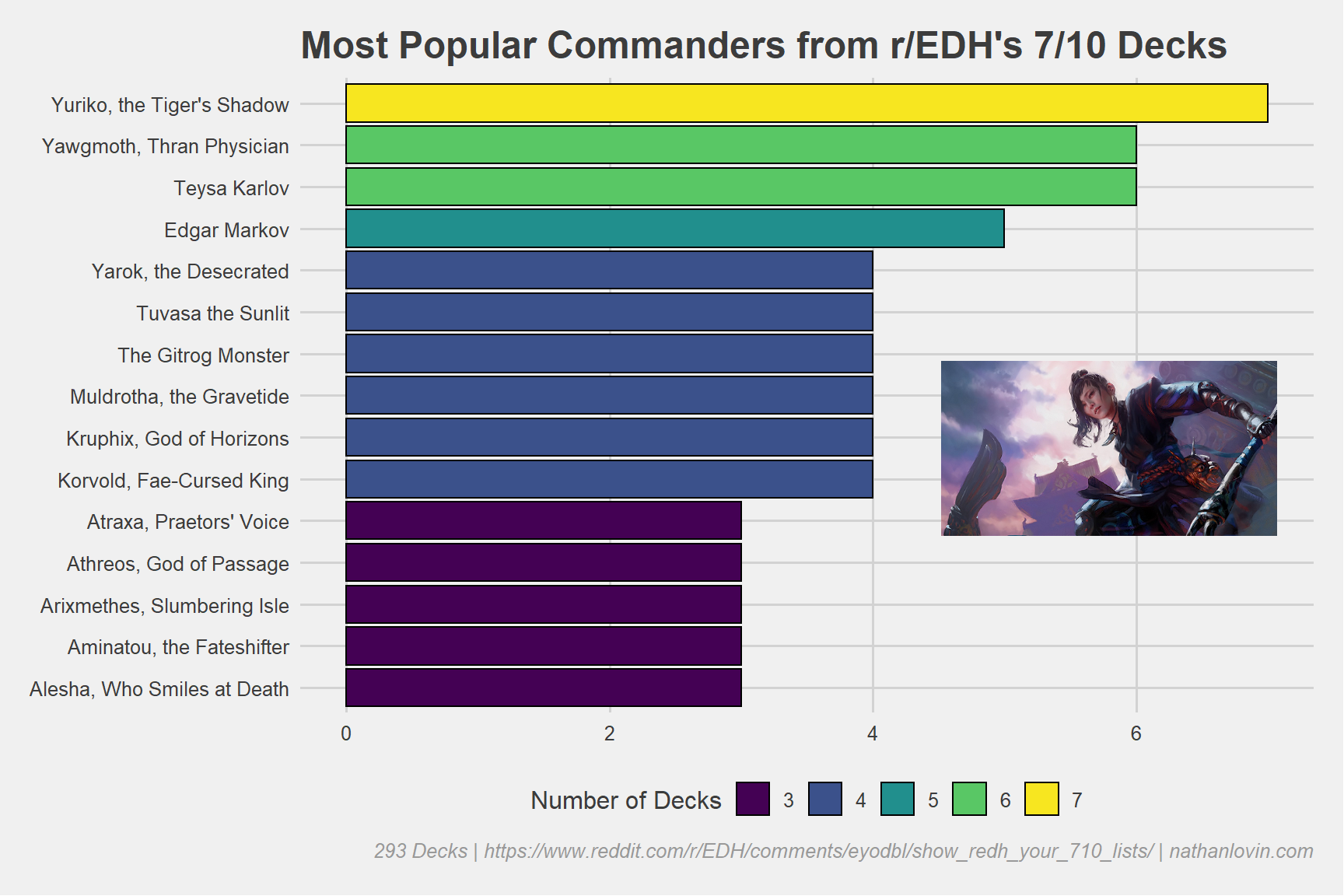 Most commanders come from the past two years. The graph below shows the frequency of commanders from the thread by the year they were initially released. This trend might be due to the increased focus on producing commander-viable legends in standard sets along with sets that contained a lot of commander goodies like Battlebond and Modern Horizons. It could also represent a growth in the format with people playing with what cards they have available, either from other formats (e.g., standard) or from picking up the precons and getting into magic altogether.

Either way, the precons have had an impact on the format. Yuriko, Tuvasa, Arixmethes, and Aminatou are in the top 15 commanders by frequency and all showed up in the Commander 2018 product (there may be others from other precons since I arbitrarily truncated the top 15 list and cards like Amintou and Arixmethes are at the top because the list is sorted alphabetically - I need to look at the full list of commanders with 3 deck lists). Even if we look at the top 10, 4/10 most frequent commanders come from non-standard sets (either Modern Horizons, C18, or the 2019 Brawl decks). 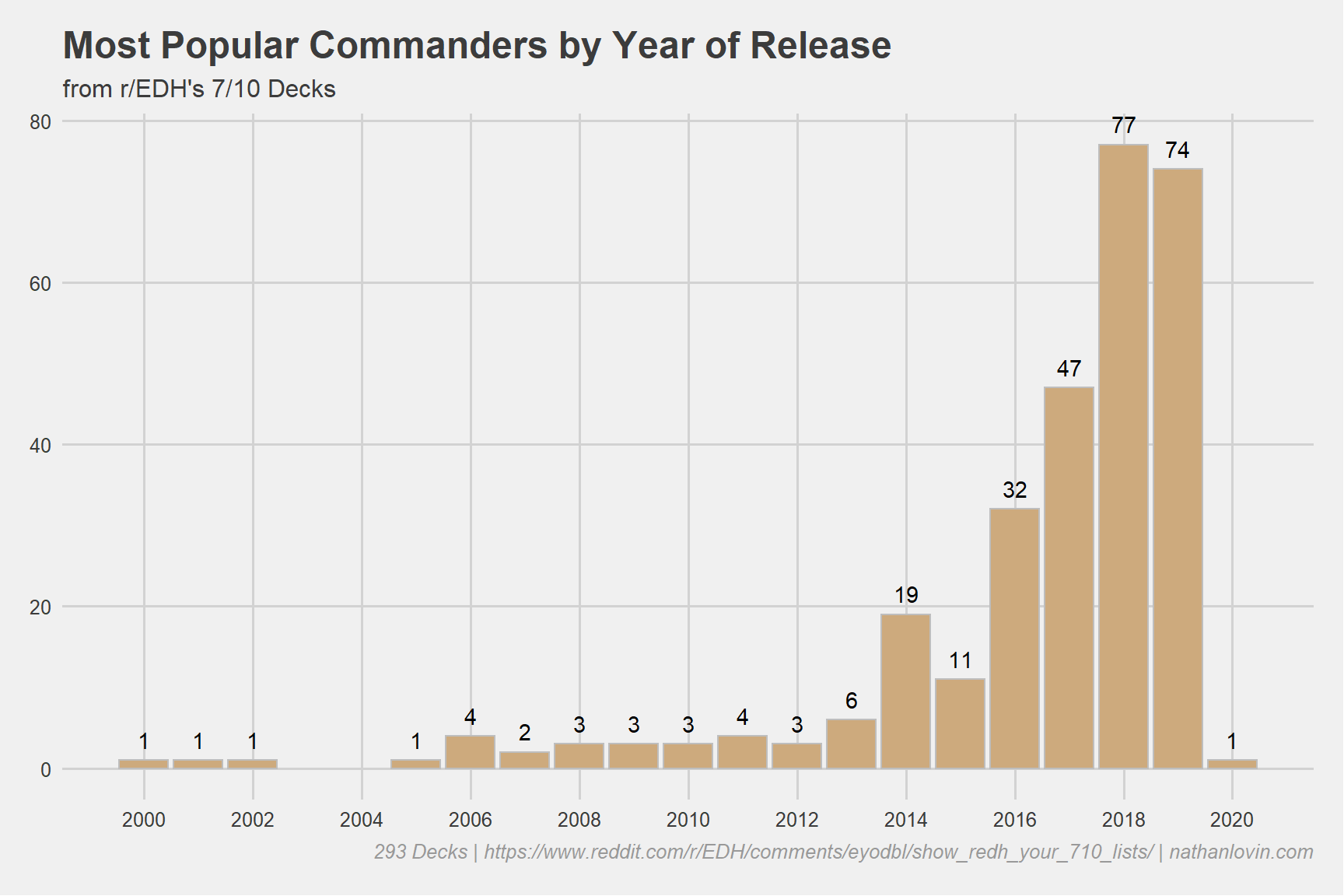 Cards follow a similar trend, with most cards also coming from the past few years. Again, I wonder if this just the effect of magic seeing large growth in the past few years and that growth feeding into commander just as much as it has in other formats like standard. 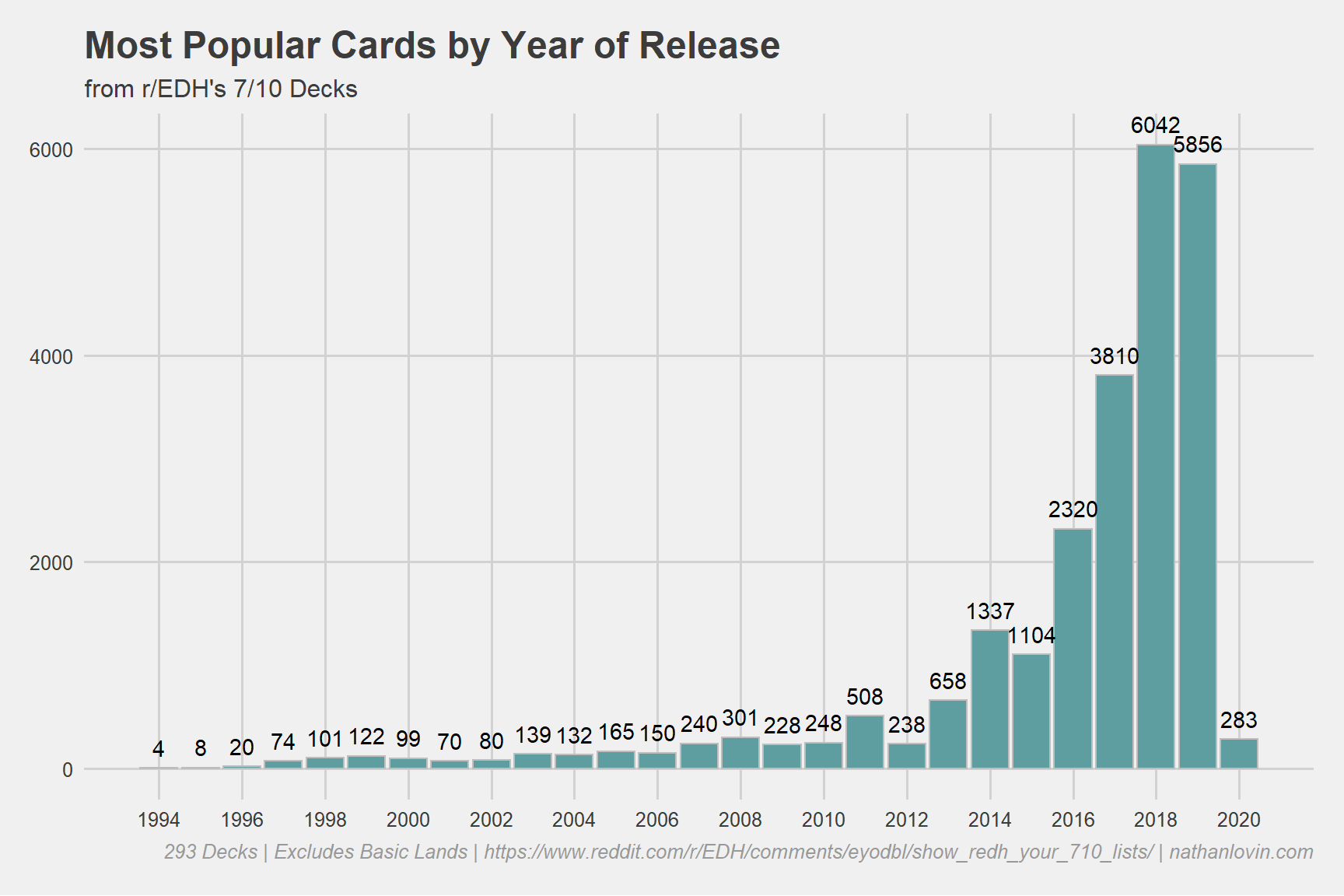 Looking at the popularity of individual cards, Sol Ring is unsurprisingly the most common card among the decklists. It shows up in 249/293 decks. Commander tower isn’t far behind, appearing in 228 decks. Further down, there are some removal staples, such as Swords to Plowshares and the dreaded Cyclonic Rift. The artifact protection duo of Lightning Greaves and Swiftfoot Boots are also common sights. Everyone’s favorite robot, Solemn Simulacrum, also made the list, which isn’t surprising either since it’s a key way of ramping out lands in decks without green. I was a little surprised not to see Rampant Growth here. I tend to put it in every deck that I can, but I appear to be out of step with the rest of the EDH community (at least as it is represented by r/EDH). 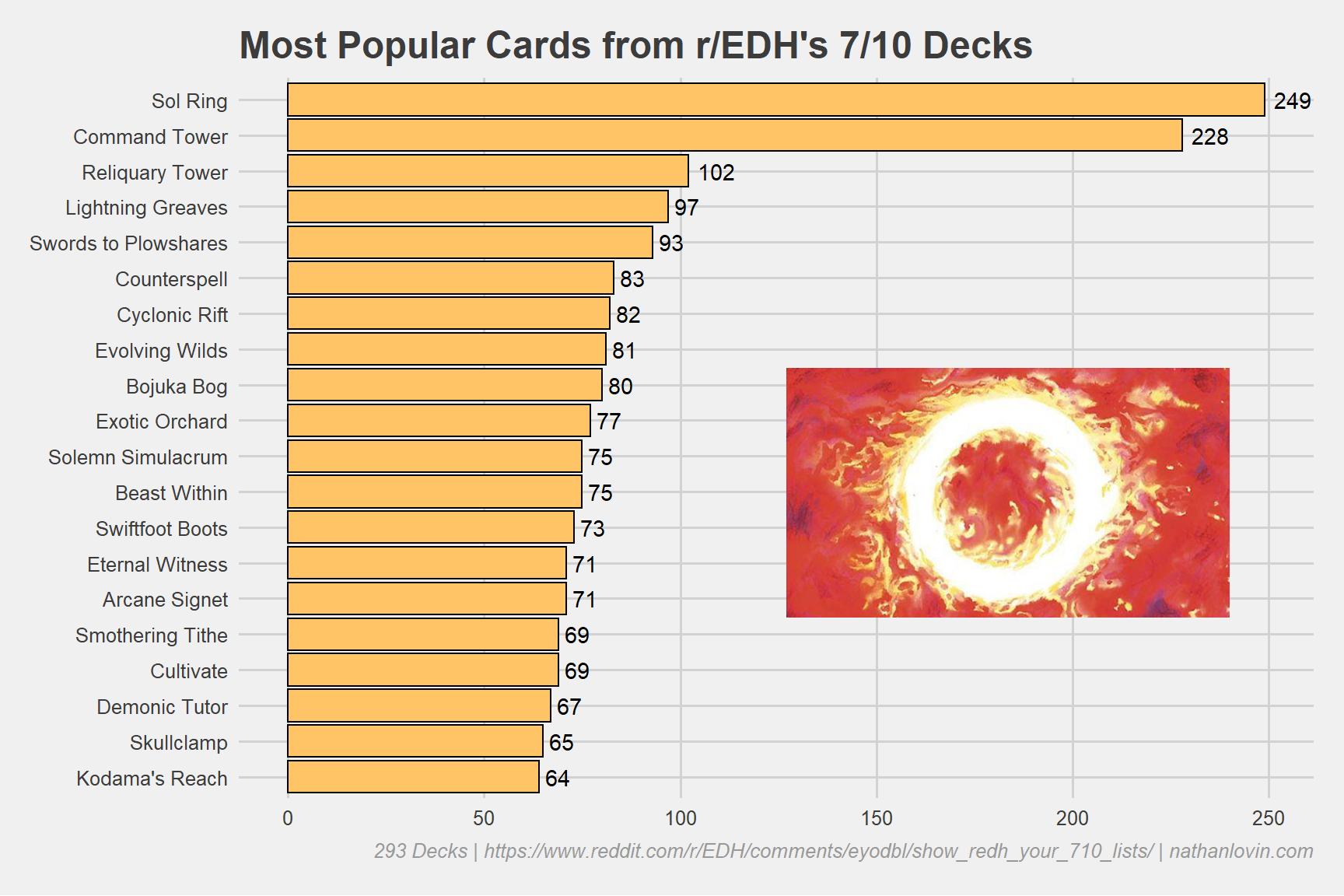 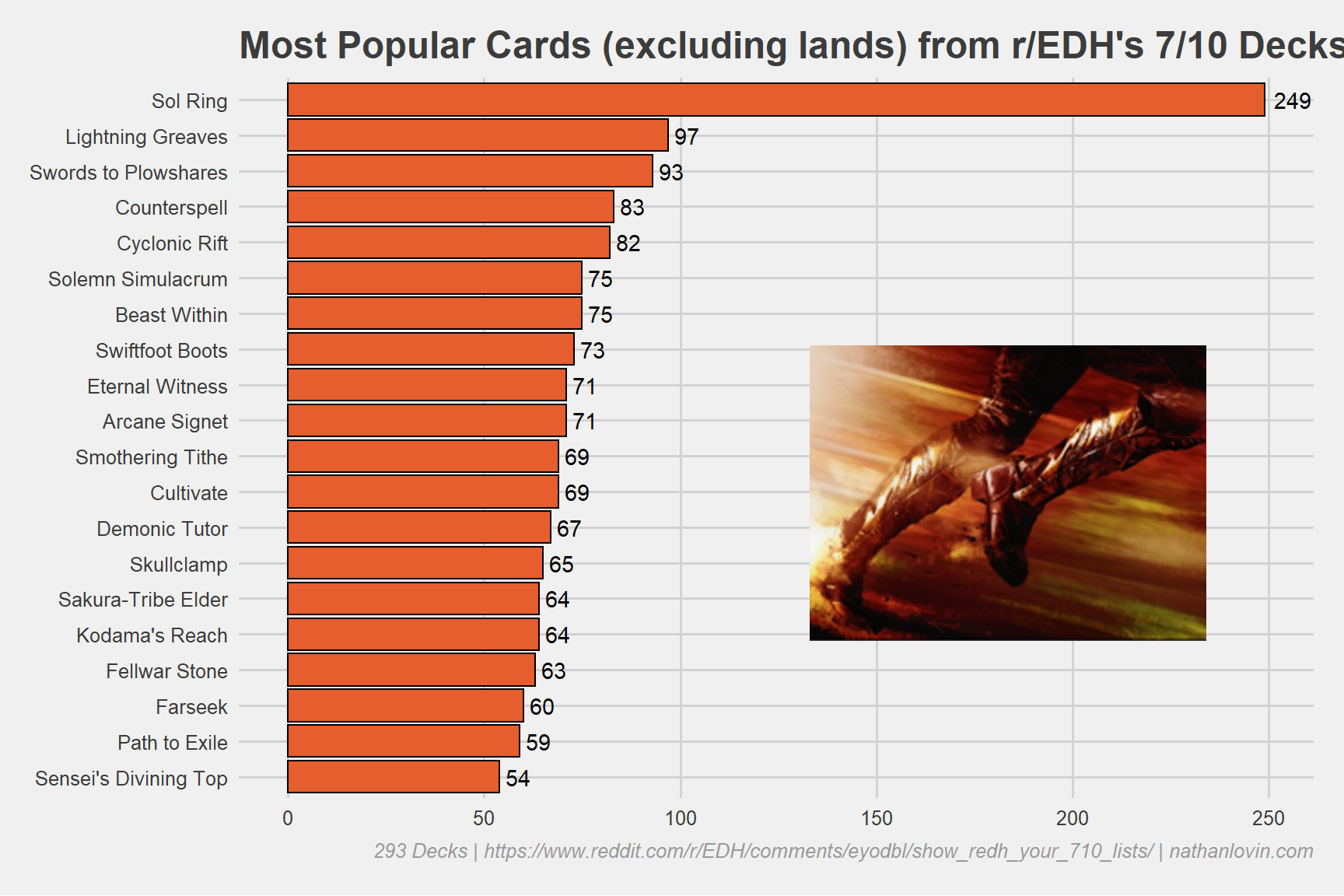 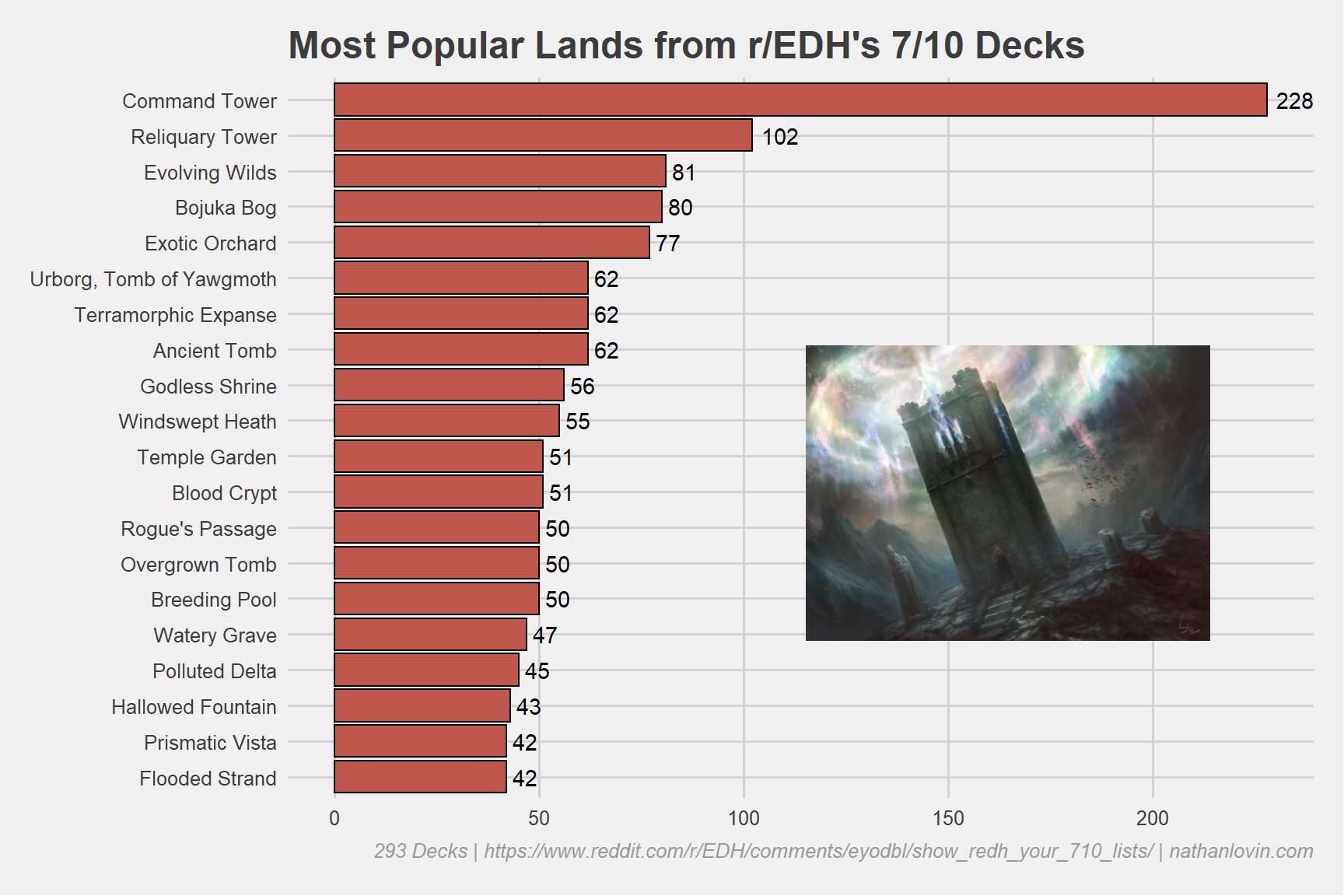 The Art of the Possible

This was just a fun category I threw in here. I’ve always loved John Avon’s weird art for the card Anger, but I don’t think I realized how prolific he was (at least in terms of how often his art shows up in r/EDH’s decklists). This category is a little wonky though, because I’m not sure how Scryfall’s API dealt with multiple artists for a given card. The aforementioned Anger has two different card arts that I’m aware of, but I’m not sure who’s art counted in this measure — something I need to check on more (but this was really just for fun anyway). 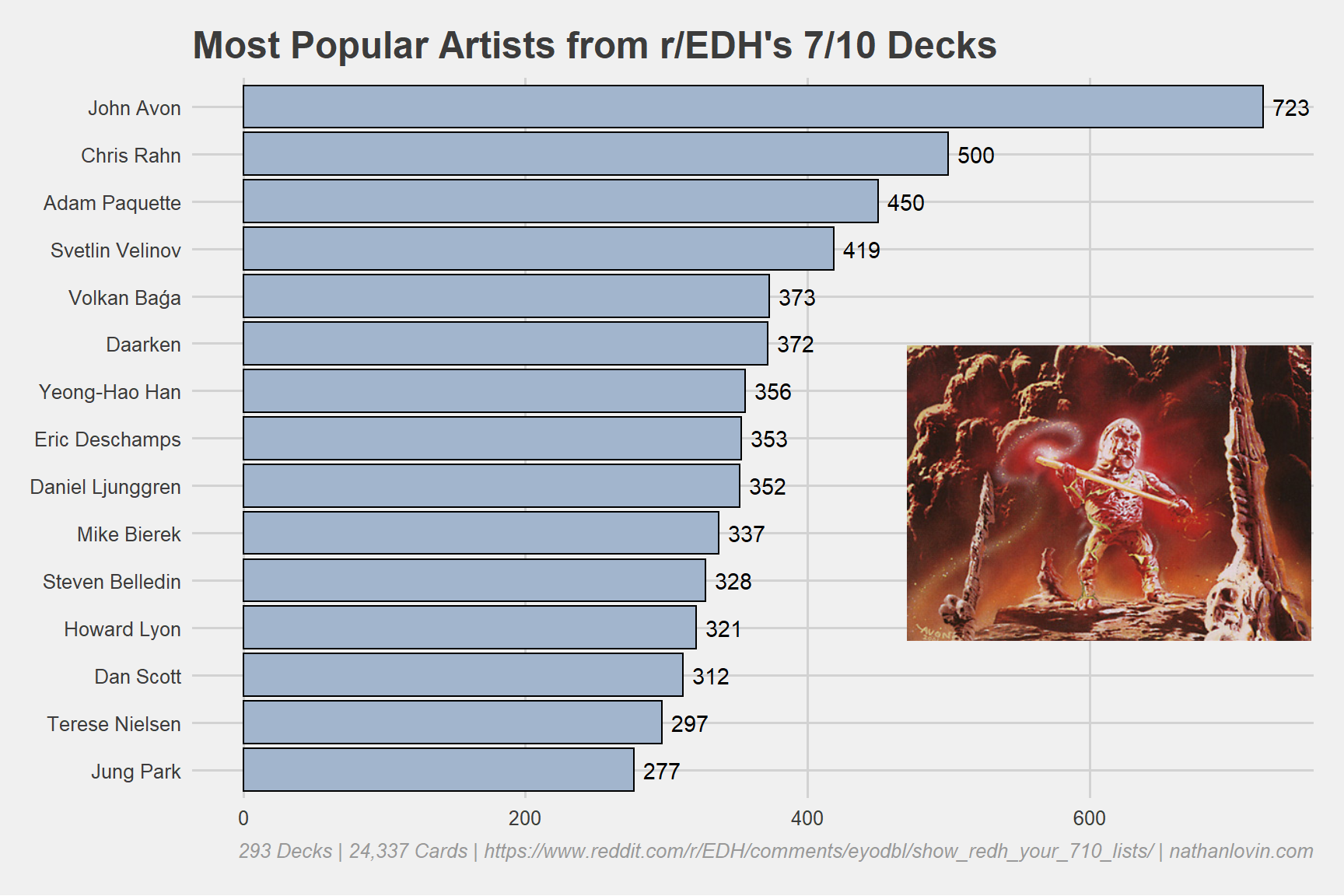 The Price of Power

Yikes. Magic can be expensive. Building a magic deck can be a labor of love, and with non-rotating formats, you can constantly update and add new cards. I have a few decks that have steadily grown in cost as I’ve upgraded them, so I suppose it’s not shocking to see a number of decks over $1000. This trend gives the data a distinct right skew, but it was nice to see that most of the decks were less than $500. Even at this price point, though, I can see why proxies are so important to the format. Not everyone can afford to kit-out a deck, so having that option to proxy the more expensive pickups is great.

Note: Price data is as of Feb. 12 using the Scryfall API for TCG Player market price

So, I looked at the distribution of cards by CMC, but it’s not particularly interesting. There is an Appendix with the distribution if you’re interested though. This next graph shows the average CMC of a deck against its cost, revealing a very slight negative relationship between the two. As the average CMC of a deck increases, it generally gets cheaper in dollar terms.

That makes sense in a way. More efficient tutors – a la Demonic Tutor – and mana generators – Mana Crypt – are more expensive (in dollars) than their higher costed (in CMC) relatives. At the same time, EDH is still a format with big CMC threats regardless of deck price, so it also makes sense that this trend is only a slight one.

In fact, the ‘trend’ looks like it may be driven by the two extremes in the data. Very cheap decks (CMC) are very expensive ($), while budget decks have a much higher CMC; however, decks in the middle are all over the place. So take this all with a grain of salt. 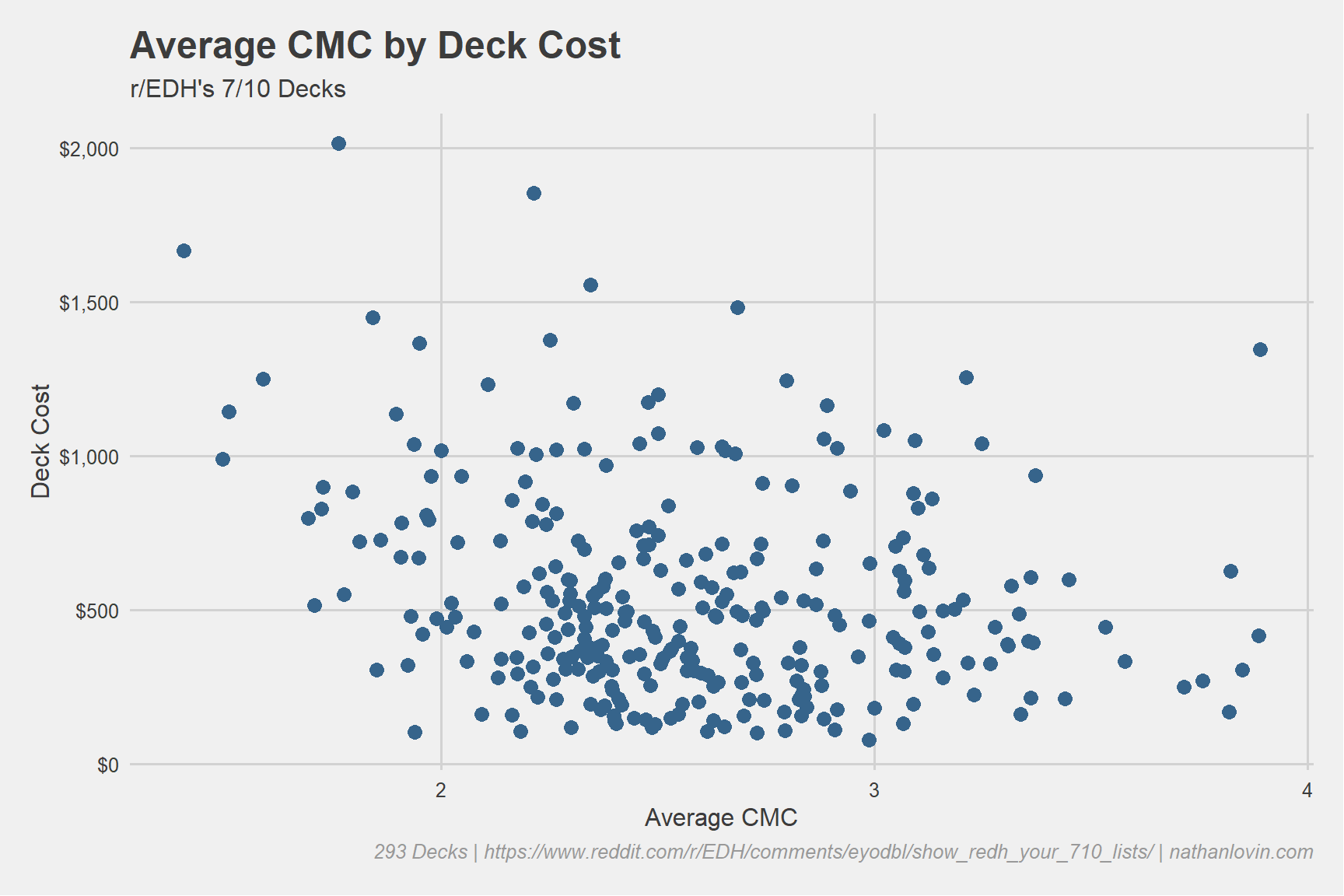 This was a fun project! I hadn’t done much work with decklists before, but I’m excited to keep digging into the data and see what I can learn. If you have any suggestions, edits, fixes, or (hopefully nice) criticisms, I’d love to hear them! 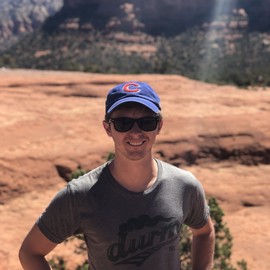 Ex-scholar working in the data science field. My current interests are in learning dbt and other data engineering-adjacent things such as Apache Airflow while I pursue creating my own data lake and data warehouse related to Magic the Gathering.